This universally recognised yoga pose opens out the back of the body, strengthens the shoulders and scapula stability and core stability.

Come onto all fours, in a four-point kneeling position, with the knees under the hips and the hands just slightly in front of the shoulders.  Spread the fingers wide, pressing the bases of the index fingers along with the web of skin between forefinger and thumb into the mat.  Tuck the toes under.

Inhale to prepare and then exhale to lift the knees off the floor, raising the hips in the air, into an inverted V position.  Release the sitbones into a neutral position, so the tailbone does not tuck under.  Straighten the knees as much as possible and try to get the heels as close to the floor as is manageable.  The ears should be positioned in between each arm to prevent the head from hanging.  Hold pose for up to five minutes.

Stretches the hamstrings, gastrocnemius, soleus, lower back.  Strengthens shoulders and upper back

Maintain a long straight spine, as this is more important than having straight legs, so bend the knees if necessary, to avoid the back rounding

Draw the torso away from the groins, keeping the length in the front of the torso

Lift the sitbones up towards the ceiling, to maintain a neutral spine

The weight should be distributed evenly between the two feet

For those with any wrist problems, come off the hands and down onto the forearms instead

Knees may be bent slightly for those with really tight hamstrings

This pose can be performed with the heels against a wall for stability and support.  It can also be practised facing the wall with the hands on the wall (torso parallel to the floor) in order to practice the arm spiral.

Loop a yoga strap around the upper arms (just above elbows)

For an extra challenge, raise the right leg behind in the air, following the diagonal alignment of the torso 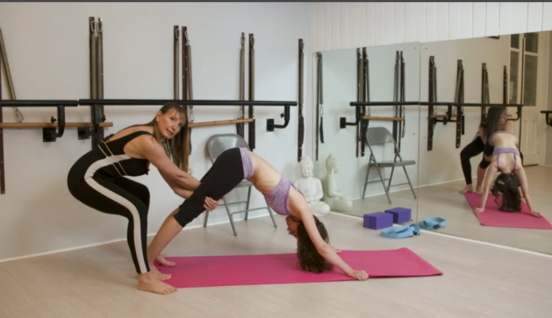 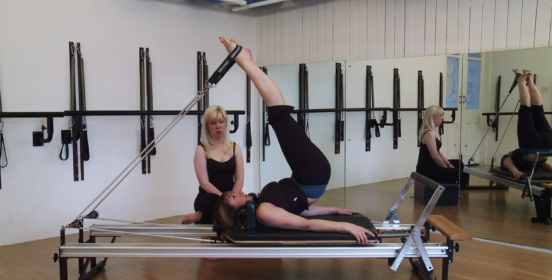