To legs act as a lever whilst the abdominals engage to achieve stability in the pelvis, securing it in a safe neutral position

Lie supine and place the legs on top of the ball with the legs straight.  The buttocks and backs of the thighs do not touch the ball but the backs of the calves do touch the ball.  The arms are on the floor down by the sides of the body.  Inhale to prepare.  As you exhale, engage the core abdominals and gluteals and lift the buttocks off the floor to form a neutral bridge position.  The lumbar spine should be in a neutral position and there is a diagonal line formed between the shoulders, hips and knees.

Inhale - to engage the core abdominals and lift one leg up in the air until the leg is around 90 degrees above the hip.  Straighten the leg as much as possible but still keep the knee directly above the hip.  For tight hamstrings, the knee may be bent slightly.

Exhale – to push the leg out to the right and then away from the body towards the ball, as far as a neutral pelvis can be maintained.

Inhale - to circle the leg across to the left and then return to the starting position.

Only extend the leg out to the side or away from the body as far as a neutral pelvis can be maintained to avoid the tendency for the pelvis to roll (i.e. will tilt from east to west or vice versa depending upon which way the legs are moving)

Keep the gulteal muscles engaged throughout to prevent any sagging in the lumbar spine.  The pelvis should remain at the same height throughout

The leg that is in the air may be bent at 90 degrees rather than straight (i.e. knee circles) to make this exercise easier

For certain back problems or excessive lordosis, a bridge position may feel uncomfortable on the lower back even though a neutral position is maintained.   In this instance, a slight posterior pelvic tilt, with the lumbar spine in flexion may be desired as an alternative position..  More of the thoracic spine will need to be in contact with the floor in order to achieve this position. 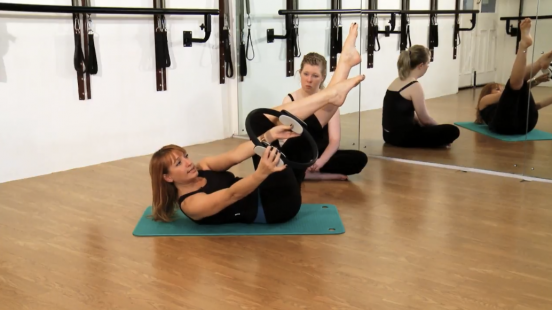